The history of any town is important. After all, without history there is no heritage, and without heritage there is no past on which to build. With such a colourful history however, Penrith has much upon which to build - and unearthing some of its past is the particular aim of the Town Trails, a series of downloadable walks which illustrate the town's colourful history and provide answers to many, who, where, why, when and how questions.

Information signs can be found around Penrith and if you have a smart phone, click on one of the QR codes to follow an ‘Explore Penrith’ walk through the town - It aims to be accessible to all, including those with disabilities. The walk takes about 1½ hours in total but you can dip in and out as the walk circles around town.

Penrith was granted a market charter in 1223 by Henry III. In 1854 the market rights were leased by the Board of Health until they were eventually bought outright in 1878 for £4140. Today Eden District Council holds the rights to the market, ensuring that they are well populated with sellers and that they are promoted and publicised to the public.

Traditionally farmers brought their produce into Penrith on a horse and cart, the need for stabling explains the many alleyways which lead from the front of inns to the stables behind. Today these alley ways are very much in use and lead to a variety of delightful courtyard spaces, where you can find delightful restaurants and specialist shops.

At one time Penrith had 57 public houses, with a population of 9182! However the inns and pubs had many uses other than eating and drinking. Inns were recognised places by which sell local produce at the markets. Grain sales were held outside the inns in the Cornmarket area of town (hence the name). Traditionally the Blackbull was Rye, the Black Lion was Wheat, The Fish Inn and White Hart were Oats, and the Griffin was Barley. As the town grew and prospered more areas of the town established their own specific markets. See our What’s On page for the latest markets held today. 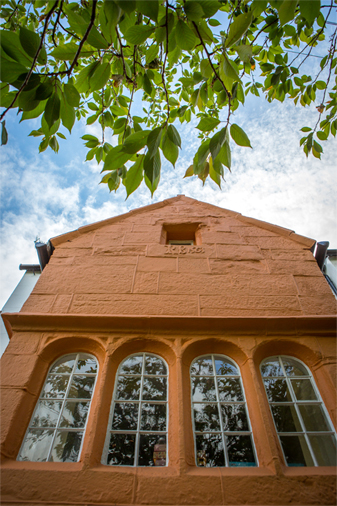 William Wordsworth spent a large amount of his childhood in Penrith, attending The Dame School run by Anne Birkett. The building over looks the beautiful St Andrews Church and is probably the earliest example of a residential residence in Penrith.

Daffodils Coffee House is named in honour of the great poet and can be found on St. Andrews Churchyard, so why not grab a coffee and read a few verses?

Penrith Castle probably owes its origin to Ralph Neville 1st Earl of Westmorland who acquired the Manor of Penrith in 1396. The tower does look like a Pele Tower which was designed to with stand short sieges and are numerous in the Border region, due to frequent raids by the Scots.

Today there is a wooden footbridge leading to the red sandstone castle remains, which are open to the public and can be explored. Castle Park is situated next to the ancient ruins and has tennis courts, a bowling green and a children’s play area. There is a monument to those that died in the Boer War called the 'Black Angel' at the entrance of Castle Park, the park is the largest area of green space in Penrith.

Find out more about our local history:

November to March – Monday to Saturday 10am – 4pm.